A/C 101 - Introduction to the refrigeration cycle 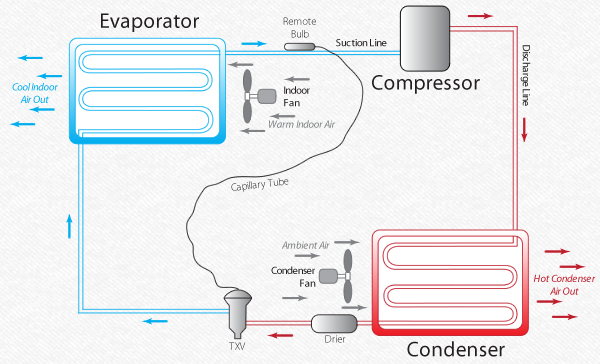 An air conditioner cools your home with a cold indoor coil called the evaporator. The condenser, a hot outdoor coil, releases the collected heat outside. The evaporator and condenser coils are serpentine tubing surrounded by aluminum fins. This tubing is usually made of copper.

A pump, called the compressor, moves a heat transfer fluid (or refrigerant) between the evaporator and the condenser. The pump forces the refrigerant through the circuit of tubing and fins in the coils.

The liquid refrigerant evaporates in the indoor evaporator coil, pulling heat out of indoor air and thereby cooling your home. The hot refrigerant gas is pumped outdoors into the condenser where it reverts back to a liquid, giving up its heat to the outside air flowing over the condenser's metal tubing and fins.

Throughout the second half of the 20th century, nearly all air conditioners used chlorofluorocarbons (CFCs) as their refrigerant, but because these chemicals are damaging to Earth's ozone layer, CFC production stopped in the United States in 1995. Nearly all air conditioning systems now employ hydrochlorofluorocarbons (HCFCs) as a refrigerant, but these are also being gradually phased out, with most production and importing stopped by 2020 and all production and importing stopped by 2030.

Production and importing of today's main refrigerant for home air conditioners, HCFC-22 (also called R-22), will begin to be phased out in 2010 and will stop entirely by 2020. However, HCFC-22 is expected to be available for many years as it is recovered from old systems that are taken out of service. As these refrigerants are phased out, ozone-safe hydrofluorocarbons (HFCs) are expected to dominate the market, as well as alternative refrigerants such as ammonia.

Welcome to the Sen Plex blog! Find out what we've been up to along with tips and guides on various air conditioning and plumbing topics.